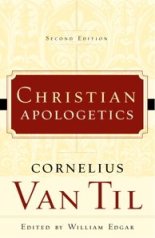 Although I have written critically of Van Til’s critique of Barth, I appreciate his contribution and general approach to apologetics. I recently looked a bit at Christian Apologetics, a revamped version of his syllabus for his apologetics class at Westminster, edited (and helpfully introduced) by William Edgar. Edgar describes Van Til’s presuppositionalism as rooted in his desire to be rigorously and consistently reformed – and thus God-centered – in his apologetical method. In other words, for Van Til, reformed theology + apologetics = presuppositionalism. Obviously, reformed theologians more inclined to classical apologetics disagree! I am fascinated by this discussion, and want to learn more.

My most fundamental question, and a question I see at the root of the whole debate, is this: can you argue for Christianity without presupposing God? Van Til seems to answer this question in the negative on the grounds that you cannot argue at all without presupposing God, because factness and argumentation are themselves unintelligible apart from God. Rationality itself must assume God. God is the context of everything, including ideas.

Although I sometimes feel that Van Til is too architectonic and sweeping in his statements, I cannot deny that this basic orientation is very powerful. I found this Van Tilian statement very interesting and helpful in understanding the starting point of his thought: “I feel that the whole of history and civilization would be unintelligible to me if it were not for my belief in God. So true is this, that I propose to argue that unless God is back of everything, you cannot find meaning in anything.”