Where did the moon come from? 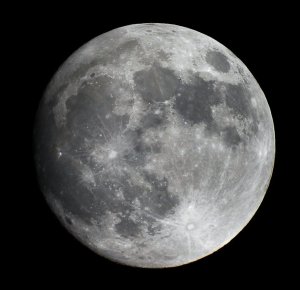 You’d think this would be an easy question, discovered and agreed upon by scientists for some time. After all, we’ve traveled there, and learned about much farther away and more obscure objects in outer space. I am watching the History Channel’s The Universe right now and finding it fascinating. Tonight I watched an episode on the moon which discussed various theories about the origins of the moon. Amazingly, it was not until 1984 that a theory for how the moon came to be came to be generally accepted among scientists, and even now it is not proven or universally agreed upon.

1) In 1873 Édouard Roche proposed the “co-accretion theory,” which stated that the earth and the moon formed as a double system out of the same material around the same time, as a kind of solar system in miniature. The other planets in our solar system have origins as gas rings revolving around the sun which eventually contracted and coalesced into solid globes because of gravity – why couldn’t the moon have formed in the same way? The problem with this view is that the moon has a much lower core iron content than the earth – if they developed at the same time, they should have the same composition (at least roughly). This theory also struggles to account for the angular momentum of the moon.

2) In 1878 George Darwin (Charles Darwin’s son) proposed the “fission theory.” Darwin discovered that the moon is gradually moving farther and farther away from earth (1.5 inches per year). Therefore Darwin, considering what would happen if we traced this movement backwards in time, proposed that a portion of the earth had separated off from the earth early in its history (the “scar” of which was believed to be the Pacific Ocean). But in order for this theory to work, the earth would have to be spinning too fast to account for its present rotation speed. Also, no credible cause for this alleged separation has been established.

3) In 1909 Thomas Jefferson Jackson See proposed the “capture theory:” that the earth had originally been a separate globe and then at some point gotten too close to earth and been drawn in by its gravity. There is no resisting medium, however, to cause such a massive object as the moon to slow down enough to be captured.

4) The theory that has finally gained relative acceptance is called “giant impact theory.” This is the idea that the moon is the result of an asteroid collision into the earth early on its history. In this theory, this collision scatters an arm of material into orbit around the earth, which gradually coalesced into the moon. This collision is what caused the earth to start rotating, gave us 24 hour days, and deposited huge amounts of iron into the earth’s core. 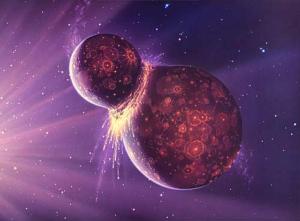 Clarifying thought: of course I believe God created the moon. But my idea of “creation” is wide enough to incorporate the use of intermediate causes, as we can say that God is the creator of trees, when (viewed from another angle) trees come from seeds.