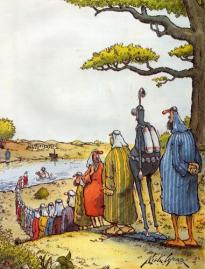 Since I’ve been going through particular texts, I thought it would be good to give a more general response to the reformed/covenantal argument for paedobaptism.  Its a big issue, and there are lots of points to make, but what follows is a brief summary of the main reason I do not accept covenantal paedobaptism.

B.B. Warfield gave a helpfully succinct expression of the reformed paedobaptist view: “the argument in a nutshell is simply this: God established his Church in the days of Abraham and put children into it. They must remain there until he puts them out. He has nowhere put them out. They are still then members of His Church and as such entitled to its ordinances. Among these ordinances is baptism.”

My response can be condensed into two words: which children? Circumcision is given in Genesis 17:9 to “you and your seed (or offspring; or descendants; Hebrew zerah) after you, for the generations to come” – the “children” in view here are the inter-generational descendants of Abraham. The faith of an Israelite child’s parents was not the decisive factor in that child receiving circumcision – it was his association with the nation of Israel. In other words, the lines of covenant were not drawn around individual believing family units throughout the Old Testament, but around the national family of Abraham. It was not the “children of believers” who had right to the sacrament of initiation, but the “children of Abraham.”

The force and relevance of this point can be captured by asking: why not baptize the grand-children of believers? If we are really being continuous with circumcision and the Old Testament precedent, why stop at one generation? Why indeed include only children and not “every male throughout your generations, whether born in your house or bought with your money from any foreigner who is not of your offspring, both he who is born in your house and he who is bought with your money” (Genesis 17:12-13)?

My disagreement with covenantal paedobaptism is therefore not in spite of covenant theology and unity across the biblical story, but because of it. I agree with traditional credobaptist writers like Jewett and Kingdon and Wellum that paedobaptists emphasize unity at the expense of movement within biblical theology, but I would go even further and say they have not even correctly structured the unity of the covenants. In no covenant and in no era has the sacrament of initiation ever been for “those who believe and their children.” This ecclesiology is new and unprecedented. Better, in my opinion – and more continuous with circumcision and the Old Testament precedent – to define the church as the children of Abraham: defined by physical descent throughout the Old Testament (Genesis 17:9), and defined by sharing Abraham’s faith throughout the new covenant (Galatians 3:7).