We are in the middle of an all-time record blizzard here in DC. The previous record for snowiest month in Washington D.C. was 35.2 inches, set in February 1899 – by the end of the snowfall today, people are predicting that areas of Washington will have seen as much as 52 inches in February 2010. Right now we are close to 30 inches, and winds up to 60 mph have created massive snow banks. I went outside for a walk/jog in it, and it was crazy. Even in the center of Capital Hill, not a soul was in sight, everything was shut down, cars were buried, and the wind was so strong it almost knocked me over. It felt like something out of The Day After Tomorrow.

I love storms like this, but the downside is that Esther’s flight back has been delayed three times now, meaning she won’t be back for another two days – also meaning that I have two more days of eggs, spaghetti, and cereal (about the range of my cooking ability). I miss my wife! This is longest we have ever been apart.

I didn’t take this picture, but this is just what the Capitol looked like today when I jogged past it: 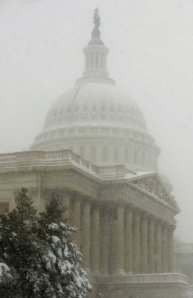