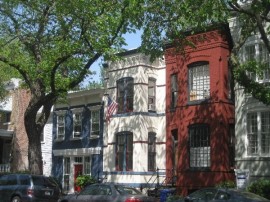 Esther and I are enjoying our spring here on Capitol Hill, though it has been a longer transition season than we expected, which has been very hard. Filling my time these days are: walking dogs, tutoring students, doing a little website work for 9marks, hanging out with CHBC people, reading The Lord of the Rings, catching up on some TV shows with Esther (mainly House, our current favorite), going to the gym a lot with Esther, researching and writing an article on Christ’s resurrection, designing a card game based on The Lion, the Witch, and the Wardrobe, and applying for jobs. We should know more on the job front in the next few weeks – thanks for your continued prayers.

I thought that it would be devastating not to have a pastoral job after my internship ended, but in many ways this has been one of the most joyful seasons Esther and I have had thus far in our marriage. We love living on Capitol Hill (its especially beautiful here in the spring), and we are grateful for continued learning time at a thriving church. I’ve also learned a lot from working a humbling and physically exhausting job (walking dogs). I’m in the best shape of my life – I am either on my bike or walking a dog from roughly 11-4, and then Esther and I usually work out at the gym or go on a walk when she gets home at 5. I didn’t think my body could adjust to that, but it has. I eat about 5 small meals a day instead of 3 large ones, and have so much more energy than I used to. Life is simpler these days, and that has allowed us to learn and grow in new ways. We’ve also felt the sufficiency of Christ in new ways through this situation. But we are excited as we look into the future and ready to move on. Thanks for your continued prayers – Lord willing, I will have an update in a few weeks.