Some C.S. Lewis scholars have popularized the idea that Lewis had a serious crisis of faith after a debate with Elizabeth Anscombe, a Roman Catholic philosopher, at the Oxford Socratic Club on February 2, 1948.  Anscombe, it is claimed, so demolished Lewis’ argument regarding naturalism and the possibility of human reason (advanced in chapter 3 of Miracles) that Lewis abandoned apologetics and turned to children’s literature for the rest of his career.  This view is advanced, for example, in the biographies of George Sayer and A.N. Wilson.  Sayer suggests that Lewis was humiliated, recognized that his argument was demolished, and came to see that he was no longer capable of writing further apologetics works.  Wilson goes even further, claiming that Lewis was “stung back into childhood by his defeat.”  He portrays the post-Anscombe Lewis as a “little boy who was … degraded and shaken.”

Because this view is often used to justify a dismissal of all of Lewis’ apologetic work (since even he allegedly rejected it), I think its worth responding to.  Some thoughts:

1) The claim that Lewis abandoned apologetics after the Anscombe debate simply gets the facts wrong, as anyone can see by briefly glancing at the contents and original publication dates of the essays in God in the Dock.  Some examples would include his 1952 article “Is Theism Important?,” his 1955 “On Obstinacy of Belief,” his 1958 “Rejoinder to Dr. Pittenger,” and his 1959 “Modern Theology and Biblical Criticism.” For other examples, see Victor Reppert’s post here.  In addition, its worth noting that Lewis published a revised version of the argument critiqued by Anscombe in the 1960 edition of Miracles, which Anscombe herself recognized to have more adequately met her initial objections.  All of this is difficult to square with the idea that Lewis gave up on apologetics.

In addition, the whole idea of a “turn” from apologetics to children’s literature is a bit strained.  Lewis had always loved children’s literature, and had already begun several children’s stories (though thus far they had all been aborted).  And the picture that would eventually lead him to write the Narnia books – a faun walking through a snowy wood at night – had been on his mind from his teen years.  Moreover, his literary output had already been extremely diverse, with not only apologetics books but poetry, science fiction, short stories, literary criticism, social criticism, allegory, and The Great Divorce (however one categorizes that) among his writings.  That he would publish in a new genre is hardly shocking.  Nor is it that last time he would do so (e.g., Till We Have Faces, Reflections on the Psalms, etc.). 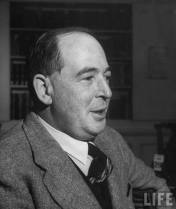 2) The extent to which Lewis was bothered by the debate has been greatly blown out of proportion by people like Wilson and Sayer.  All that the evidence suggests is that there was an earnest discussion in which Anscombe revealed some weaknesses in Lewis’ argument, which he later revised to her satisfaction.  While some friends (e.g., Derek Brewer) spoke of Lewis as “disturbed” by the incident, others (e.g., Humphrey Havard) recollected no such feelings on Lewis’ part.  No one claimed he had a crisis of faith.  For more quotes and perspectives on the event, see Alan Jacobs’ critique of A.N. Wilson on pp. 231ff. of The Narnian (Harpercollins, 2005).

Its also worth noting how Anscombe herself recalled the evening:

The meeting of the Socratic Club at which I read my paper has been described by several of his friends as a horrible and shocking experience which upset him very much…. My own recollection is that it was an occasion of sober discussion of certain quite definite criticisms, which Lewis’s rethinking and rewriting showed he thought was accurate. I am inclined to construe the odd accounts of the matter by some of his friends – who seem not to have been interested in the actual arguments of the subject-matter  – as an interesting example of the phenomenon called projection.”

3) The sense that one needs to find some external cause in Lewis’ life for the Narnia books suffers from a highly mechanical view of literary production.  Even the more sympathetic Lewis scholar Michael Ward, in critiquing the Anscombe legend, seems to feel a need to find some other apparent cause for Lewis’ “turn” to children’s literature.  So he suggests in chapter ten of his Planet Narnia (Oxford University Press, 2008) that while Lewis did not abandon apologetics after 1948, the Narnia books nevertheless were written in response to the encounter with Anscombe.  Specifically, Ward suggests that Lewis intended to make his point about human reason as inconsistent with naturalism through children’s literature because he had failed to make it through abstract philosophical argument.  Besides relying on a rather strained reading of the Narnia books, this view still attaches too much significance to the Anscombe debate.  There is no need to find some external cause for Lewis writing children’s literature.  Anyone who has written a story knows that literary motivation is often internal and spontaneous and impossible to identity with particular events in the author’s life.  The imagination itself provides the occasion (especially for someone with as powerful an imagination as Lewis had).

Lewis wrote the Narnia books because he was C.S. Lewis and it was in his head and heart to do so.  Saying more than that is unlikely to be helpful.  If we’re going to need external causation for everything, why don’t we write biographies of Wilson and Sayer and then ask what events in their life prompted them to write their own books?