Out of the Silent Planet 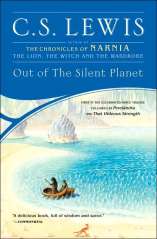 I’ve been listening to Out of the Silent Planet this week.  Its not quite as good as the other two books in the space trilogy, I don’t think – but nevertheless its a lot of fun.  He makes a lot of profound points about the nature of good and evil by contrasting the human characters with the creatures of Malacandra (which is the planet Mars, with un-fallen, intelligent inhabitants).  Its also interesting to see how early certain themes had settled into Lewis’ writing (it was originally published in 1938).

One thing I particularly noticed is how Lewis deconstructs the notion of the heavens as empty space.  Ransom (the main character who is taken by force to Malacandra) expects space to be dark and empty, but on his journey to Malacandra he finds it is full of light and angels.  Similarly, he expects Malacandra to be harsh and cold, but it is beauitful. He expects the Sorns (inhabitants of Malacandra) to be nasty, but they are gentle and wise.  He thinks of earth as the bright spot in the universe where there is order and intelligence and beauty, with everything else in the universe being cold and lifeless and dark.  But he discovers that the universe is teeming with life and light and it is earth which is “the silent planet.”

Obviously Lewis’ cosmology is out-dated in a literal sense, but in a more profound sense, I think he helps us see the universe (and ourselves) more accurately.  We tend to assume that the problems in life are fundamentally external to us.  But the gospel teaches us to be most grieved over the evil in our own hearts.  The greatest need is not conquering the darkness without, but killing the darkness within.  The Christian view of evil confronts us as much as Lewis’ cosmology confronts the idea of earth as the sole bright spot in a vast darkness.  Conviction of sin is as revolutionary as coming to see the heavens as filled with light and glory, and we as the silent planet.  In both life and the cosmos, the basic problem is not somewhere out there, but in us.