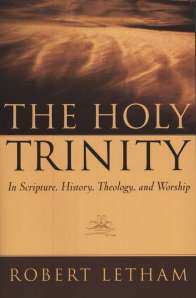 I’ve finished Robert Letham’s The Holy Trinity (or at least the parts of it I wanted to read), and I have to say its a fantastic book.  Some thoughts:

1) One of the best things about studying the doctrine of the Trinity, in my opinion, is that it forces you to engage with the whole Christian tradition, both East and West – not just Protestantism, or Protestantism + a select few Roman Catholics.  Letham does a great job at this.  He traces the development of the Trinity in the West through Tertullian, Athanasius, Augustine, Richard of St. Victor, Anselm, and Aquinas, and then parallels it with the development of the Trinity in the East through Origen, the Cappadocians, John of Damascus, Photius, Gregory Palamas, and a few more recent Eastern thinkers.  He also devotes a chapter to the filioque split, and throughout analyzes what we can learn from both traditions (East + West).  The result is that by reading the book you learn a lot about the Eastern Orthodox church as well as Trinitarian doctrine.

2) This book increased my respect for the technical language that has arisen in church history for fleshing out the doctrine of the Trinity.  Words like homoousios and hypostasis, perichoresis and procession, begottenness and being, spiration and substance, can sometimes initially seem more philosophical than biblical.  In the past I’ve sometimes wondered whether they are too abstract and speculative to be helpful.  Learning about the battles fought over these words, the issues at stake in them, and the arguments underlying them has put me in a position, if not always to understand them, at least to respect them.  For one thing, the church was forced into more technical language in order to refute heresies.  And for another, I’m convinced that such terms really do accurately convey truths about God in his eternal, triune being.  All this increases my sense of how dependent we are on the efforts of earlier Christians in our understanding of the Trinity, my appreciation of the depth and nuance of ancient Christian thought, and my desire to spend more time studying in the area of historical theology.

3) An interesting question that arises several times throughout the book is, could the Father or the Spirit have become incarnate, or only the Son?  Anselm and Thomas Torrance have strange arguments for an answer of “no.”  I have no idea what the answer is to this, but I think its an interesting question.

4) Another question I am asking: to what extent can appealing to the “divine essence” or “divine nature” or “Godhead” smuggle in a “hidden fourth,” something in God other than Father, Son, and Spirit?  In Scripture we do not meet a divine essence, but rather the One God who is who He is as Father, Son, and Spirit.  Of course, not all references “divine essence” or “divine nature” or “Godhead” imply an impersonal fourth, but I wonder if there is a danger here.  We must be wary against leaving the impression that there is anything “left over” after the three persons.

“Even Godhead exists only in and with the existence of Father, Son and Holy Ghost …. Only the One who is God has Godhead.”   -Karl Barth, quoted in Letham, The Holy Trinity, p. 283

5) Though the doctrine of the Trinity is extremely difficult, and there are many errors we can fall into on all sides, reading this book increased my sense of how much this doctrine is worth the difficulties and risks.  As Augustine put it, “in no other subject is error more dangerous, or inquiry more laborious, or the discovery of truth more profitable” (quoted on p. 2 of Letham).  The Trinity is at the heart of the Christian faith and the heart of our conception of God, with significant implications for the rest of Christian theology.  It seems to me that we are really missing out when we don’t think of this doctrine as anything more than a mathematical conundrum, to be resolved when we get to heaven.  I think the doctrine of the Trinity should influence our prayer, our worship, our devotion, and even (I think) our apologetics.  Something so gloriously and so basically true cannot be irrelevant.