Kostenberger and Swain on the Trinity in John 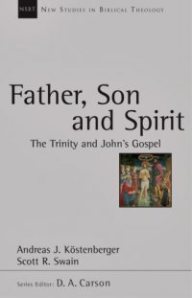 I’ve been reading my second book in the New Studies in Biblical Theology series, Kostenberger and Swain’s Father, Son, and Spirit: The Trinity and John’s Gospel (series #24, IVP, 2008). Ever since reading Robert Letham’s comment in The Holy Trinity that Trinitarianism in the gospel of John is an area that has been neglected in the scholarship, I’ve wanted to do a study on this, and I’ve also been meaning to read another NSBT book – so when I saw this book I knew it would be one to read carefully.  Though the whole book is great, I especially appreciated the second half (Part 3: Theological Reflections).  Some takeaways:

1) Kostenberger and Swain are concerned to show the link between the church’s exegesis of Scripture and her confessional formulations, or in other words, between the Bible and theology.  This not only made their book refreshing and multifaceted, but it also demonstrated how the doctrine of the Trinity is practical.  Its not an irrelevant, esoteric dogma, pursued by ivory tower theologians.  No, its a part of the fabric of the New Testament witness and a vital part of Christian experience and worship in that witness.  In John, for example, Christian unity is rooted in Trinitarian unity (17:11, 21); Christian mission is rooted in Trinitarian mission (20:21); Christian love is rooted in Trinitarian love (17:26).  Kostenberger and Swain especially show how important the motif of mission is to John’s understanding of the Trinity (107, 171), which casts everything related to the doctrine of the Trinity in a practical light.  As they put it:

“Belief in the Trinity is not merely needed on the intellectual, cognitive level as part of subscribing to an orthodox Christian creed; it is that very triune God who is rightly the ground, energizing force, and goal undergirding the Christian mission” (164).

2) I’m finally realizing all that is at stake in debates about the definition of the word “person” in the phrase, “one being, three persons.”  This is more than just an East-West issue, but something at play among those advocating a so-called “social trinitarianism” (which Kostenberger and Swain argue against in a footnote on pp. 174-5).  I myself cannot say that I understand how you can have a “person” without a distinct consciousness and will.  But I’d like to hear more what people like Augustine and Aquinas are trying to say here when they define “person” as a relation.

3) My greatest takeaway from the book was being convinced (especially from pp. 179-186) that it is valid to infer from the economic (historical) to the immanent (eternal).  As they put it: “temporal missions reveal and are rooted in eternal processions” (180).  The relationships of the Father, Son, and Spirit in their historical revelation do not have an arbitrary and random connection to their eternal relationships.  This insight is not rooted in an out-dated translated of monogenes or biased interpretation of John 15:26 (though note the different tenses!), but in the simple and necessary conviction that God’s revelation is true.  Who He reveals Himself to be in history is who He actually is.  After all, the entire purpose of the economic is to enfold us into the immanent (17:24-26), to bring us into the love and glory existing between the persons of the Godhead from eternity past – so why should it not reveal something of the nature of this love and glory?  This insight is the fundamental reason why I affirm the filioque.  If valid inferences can be made from the economic to the immanent, then it seems to me that Christ’s reception and bestowal of the Spirit in history (John 14:16, 26, 15:26, 16:7, Acts 2:33) reveals something of the eternal relationship between Christ and the Spirit.

I’d like to study the Trinity more sometime.  It would be fascinating, for example, to compare differing developments in the East and West, using Augustine and John of Damascus as test cases.