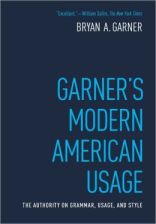 In my Historiography seminar this fall we worked through Bryan A. Garner’s Modern American Usage: The Authority on Grammar, Usage, and Style (3rd edition; Oxford University Press, 2009). Its basically a reference tool for issues of style and grammar, and I am finding it a very helpful resource for improving my writing. I think the best way to learn grammar and usage is, like most learning, by observation—reading skilled authors over and over until their writing habits soak into us. But books like Garner’s can be very helpful as a supplement to this. In class we worked through the “Quick Editorial Guide” on the inside of the front cover, which is a list of 100 common writing issues for teachers and editors to use in marking text. (Its a great tool for teachers, editors, and graders of essays, papers, etc.) Here are some of my examples of where it has stretched and helped me in my writing.

1) Garner has helpful discussions of all kinds of word errors. For example, what is the difference between assure, ensure, and insure? (My summary: assure should be used with reference to people; ensure with reference to objects; and insure strictly in a financial context.) Garner clarifies the distinct meanings of a number of word pairs that are often confused: historic versus historical, infer versus imply, farther versus further, flaunt versus flout, affect versus effect, uninterested versus disinterested, principal versus principle, etc.

2) From Garner I realized that I have been misusing the m-dash (—) for years! I incorrectly used the n-dash (–) or hyphen (-) instead. I also mistakenly put a space around my dashes. Thus, “word – word;” instead of, “word—word.” Now, from what I understand, there is some flexibility on this issue, and different authorities differ on the precise rules for dashes. Some publishers, for example, prefer spaces around the m-dash. But from Garner it seems that using m-dashes without spaces is a good default practice. He also convinced me of the value of m-dashes for good, clear writing. He claims that “the m-dash is perhaps the most underused punctuation in American writing” (678)! What I love about m-dashes is their ability to provide variety and clarity to otherwise cluttered sentences. They offer a stronger pause than a comma, but often seem to work better than semi-colons or colons (or italics, which I tend to overuse because I love their ability to add flavor to my sentences by accenting particular words).

3) Garner has a helpful discussion of phrasal adjectives. In the past, I have noticed these and tended to hyphenate them, but not always, and without fully knowing why. Now I understand more what phrasal adjectives are. Here is Garner’s treatment:

When a phrase functions as an adjective preceding the noun it modifies—an increasingly frequent phenomenon in 20th and 21st century English—the phrase should be hyphenated. Hence the soup is burning hot becomes the burning-hot soup; the child is six years old becomes the six-year-old child. Most professional writers know this; most nonprofessionals don’t (625).

Again, as with all grammar and usage rules, the underlying value seems to be clarity. Garner explains, “the primary reason for the hyphens is that they prevent miscues and make reading easier and faster” (625). And later: “upon encountering a phrasal adjective, the reader isn’t misled into thinking momentarily that the modifying phrase is really a noun itself” (626).

I’m not sure I’m convinced as Garner that phrasal adjectives are as uniformly clarifying as he seems to think. Sometimes I find them distracting. But its good to know about them, and I agree they are often clarifying. I think I want to take these on a case by case basis. I’d definitely hyphenate six-year-old child, but I don’t know about three-day visit. I wonder if hard-and-fast rules on this point might prove misleading.

4) Garner exposed a flaw in my writing with his discussion of which versus that. This is an issue I have vaguely wondered about for a while, but I have never bothered to sit down and sort it out, and thus I have tended to use these two words interchangeably. The simplicity of Garner’s basic rubric was helpful: if you don’t have a comma after the word, its usually better to use that than which. He also suggests, “use that whenever you can” (806). He grounds his counsel here in a larger discussion of restrictive versus nonrestrictive clauses, but in a pinch I will probably remember this simple comma rule as a good starting point.

5) Modern American Usage is not just about grammar. Garner also takes up numerous issues of style. For example, incomplete sentences (like this current sentence you are reading). Garner quotes approvingly Gorrell’s statement that “[the incomplete sentence] is a special device, to be use for special effects” (456). He gives 14 examples of different kinds of valid incomplete sentences (e.g., afterthought, transitional, recanting, bolstering, etc.), but in the end urges caution. 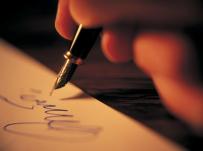 His comments here prompted some more general thoughts on the nature of good writing. I continually sense that good writing requires a careful balance between (1) being bombastic by using unusual techniques too frequently, and (2) being boring by never using unusual techniques. By “unusual techniques” I mean devices like incomplete sentences, strategically placed semi-colons or m-dashes, italics for emphasis, highfalutin vocabulary, frequent rhetorical questions, very long sentences, lots of parentheses, etc.—anything that adds greater pomp and flair to the writing. It seems to me that these devices have their purpose, but the temptation is to over-use them, causing the writing to appear too self-aware. An analogy would be the basketball player who is so good at dribbling that he spends all his time showing off his dribbling skills, rather than using his dribbling skills to try to score a basket. Its the skill of the Harlem Globetrotters versus the skill of Michael Jordan.

I think the goal we should aim for is to use unusual techniques in a way that brings greater attention to the content of our writing than the writing itself. That seems to me the acid test: am I doing this to bring greater clarity to the issue being discussed, or to me as a writer? That is why I think good writing, as with good oral communication, requires love and humility. The most eloquent and clear writers I know (C.S. Lewis and C.K. Chesterton) seem to me to have been humble in their writing (perhaps Lewis a bit more so than Chesterton?). What makes them stand out from other skilled writers was that they sought to be clear, not that they sought to be known as skilled writers. Their aim was to provoke understanding and conviction, not to impress people. This reminds me that the moral rules that govern all of reality apply to writing as much as anything else. “Everyone who exalts himself will be humbled, and he who humbles himself will be exalted” (Luke 14:11). The Rule behind all other rules is that we always write to serve others, not to prove to them—or ourselves—how smart we are.

6) I had heard of the importance of varying sentence length before, but I was struck by just how much emphasis was placed on this point by Garner. He quotes approvingly Olsen: “varying your sentence length is much more important than varying your sentence pattern if you want to produce clear, interesting, readable prose” (734). This is a practice I would like to cultivate more in my writing. It is all too natural, especially during a first draft, to make every sentence medium-length or long without realizing it. Short sentences, it seems to me, have a wonderfully disarming, heightening, simplifying effect. They are easy on the eye. They give the reader a break. They insert simplicity into complexity. They provide rhythm. And they can have, when wielded skillfully, a powerful rhetorical impact. I think of them as the equivalent of a cymbal crash within a larger, more peaceful movement of music: just as a well-timed cymbal crash can wake up a sleeping listener, a well-timed short sentence can wake up a sleeping reader.

7) Another stylistic issue Garner helpfully addresses is word choice. I gobbled up every word of his treatment of sesquipedality. (I didn’t know what the word meant before reading this entry, but it basically means using big words). Garner is sensitive to the dangers of the misuse of big words, and cautions restraint, particularly checking our motives to make sure we are not showing off. But he also recognizes that words are generally not invented unless they have some use, and even very educated English-speaking people generally use only about 10% of the words in the Oxford English Dictionary in their working vocabulary. Big words exist for a reason, and have a purpose—but they are dangerous. So how do know when to use them?

Garner gives an analogy of fractions for determining when to use big words and when to use simpler words:

Consider words as analogues to mathematical fractions, both being symbols for material or conceptual referents: would a self-respecting mathematician say 12/48 instead of 1/4 just to sound more erudite? Certainly not …. But what about the mathematician who arrives at 15/16? Is it really best to round off the fraction to 1?

He continues to suggest that sometimes “rounding off” to the simpler word is better, but sometimes not, and provides some guidelines for when to know which choice to make. The overall values driving the discussion seem to be accuracy and (once again) clarity. Garner quotes Samuel Johnson in what I think is a good rubric: “it is natural to depart from familiarity of language upon occasions not familiar” (737). Or as Garner himself puts it, “the best writers match substance with form” (737). In other words, unusual words are appropriate when they portray an unusual reality. Form follows content. My takeaway question for using big words will thus be, to use Johnson’s term: is it natural? Typically, if a big word is the first word that pops into my head as I’m writing, I will use it. If I found it in the thesaurus, I generally will not.

It strikes me how much good, clear writing comes down to an intuitive sense: does it feel right? And thus it seems to me that it is unavoidable for one’s personality to come through in one’s writing, and that part of good writing is the willingness to stand out, the willingness to be different. I am in favor of receiving edits, sharpening knowledge of grammar rules, following custom, etc. But at the end of the day, I say, go with your gut. If you enjoy your writing, someone else probably will, too. Think of Tolkien’s personal spelling choices and highly idiosyncratic writing habits in early drafts of The Hobbit! He barely submitted it for publication, and now its a masterpiece. So I would say, in addition to humility and love, good writing requires courage.