I Corinthians 7:14 and Household Baptisms 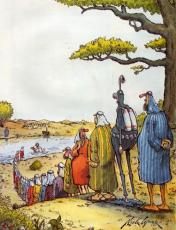 Since I’ve already addressed Acts 2:39 and Jesus’ blessing of children, I thought I would also address two more points of data in the New Testament commonly appealed to in arguments for paedobaptism: I Corinthians 7:14, and household baptisms. I share these thoughts in hope they might be helpful to others thinking about this issue, and to dialogue and sharpen my thinking if anyone wants to comment.

I remember first coming across this passage in something written by J.I. Packer about paedobaptism, and for a while it struck me as fitting together well with a case for paedobaptism. But then in continuing to read about it, someone pointed out to me that the unbelieving spouse is said to be in the same position as the child (the verb form of the noun translated “holy” [hagios] is used in reference to the unbelieving spouse). That fact prompts the question: is it possible it possible that “holiness” can refer to something other than a covenantal status? The word means holy, consecrated, cleansed, set apart, and throughout the Bible it can be used in a wide variety of ways. For example, the materials involved in the tabernacle are called “holy.” In Paul’s context here, where he is concerned that believers not feel they must divorce their unbelieving spouse when they have become a Christian (verses 12-16), I think its plausible to take it as a reference the sanctity and legitimacy of the marriage (and hence the resulting offspring). But I can’t see how “holy” could mean “in the covenant” in this context, because if it does then the unbelieving spouse must be considered “in the covenant” along with the child.

If cases for paedobaptism continue to appeal to this text, I think they should be consistent in considering all that it says, not simply what it says about the children of believers. I would like to hear more paedobaptists address just how exactly the unbelieving spouse of a believer, in their ecclesiology, should be regarded. Considering the status of such an individual might at least give paedobaptists a little more sympathy for why credobaptists say that a contrast of “in the covenant” versus “pagan” is too stark and too simple. One can be in a position of blessing with respect to the covenant without being a member of the covenant. Not everyone outside the realm of grace is equally distant from it, or in an identical relationship to it.

This is one of the most commonly appealed to points of data in the New Testament with respect to paedobaptism. By my reckoning, there are five major examples of household baptism in the New Testament: (1) Cornelius (Acts 10); (2) Lydia (Acts 16); (3) Philippian jailer (Acts 16); (4) Crispus (Acts 18); (5) Stephanus (I Corinthians 1). The important question is, do these household baptisms represent household conversions, or is the household baptized simply on the basis of one or more heads of the household converting? A couple of factors incline me to regard the first of these two possibilities as a better answer.

(1) First, in every case of household baptism except Lydia, the text makes it clear that the entire household converts:

We are not told one way or the other with respect to the circumstances of Lydia’s household. We don’t have any idea how many people were in her household, or how old they were. We don’t know whether the members of her household were with her in the place of prayer outside the gate to the riverside, where she heard the gospel, or whether they had contact with Paul and his companions during their subsequent stay in Lydia’s home (Acts 16:12, 15). Either Paul and his companions shared the gospel with the rest of Lydia’s household leading to their faith and baptism, or the members of her household were baptized without any connection to a personal gospel response. We don’t know, and thus we should be cautious about drawing too much from this text. I think the safer assumption is in the direction of the pattern established throughout Acts, rather than against it.

(3) Furthermore, when we evaluate the case of Lydia, we are not simply coming at it from a pattern of faith/repentance ––> baptism. We also have biblical precedent for some of these elements being left out, but clearly indicated by other factors to be present. The example of the Philippian jailors’ household being converted without Luke explicitly mentioning this (but nevertheless making it clear from the surrounding remarks) provides a precedent for this kind of narrative compression. This is a natural thing for an author to do, unless we insist Luke repeat himself in all the details every time he records similar events.

(4) When one considers the extent to which first-century homes operated according to principles of family solidarity, as opposed to the principles of our individualistic, democratic, egalitarian society, its not difficult to imagine entire households converting to a new religion together. I wonder if to many with a first-century mindset it would simply be taken for granted that if the parent(s) convert to a new religion, the entire family has a new religion. For instance, the wording in the Philippian jailer’s conversion is very striking: “and he rejoiced along with his entire household that he had believed in God” (Acts 16:34). Note that his family his rejoicing that he received the word of God. This certainly suggests a kind of headship and corporate family identity, but not one that operates apart from the family’s willing involvement.

(5) It is worth observing that household conversions are not limited to Acts. They are also in the gospels. One is particularly relevant for understanding how first century households, and biblical language, operate. In the healing of the royal official’s son in John 4, we read that “the father knew that was the hour when Jesus had said to him, ‘your son will live.’ And he himself believed, and all his household” (4:53). Note that the father’s recognition of the timing of Jesus’ miracle leads to his household’s conversion. This narrative provides further precedent for both the influence that the head of the household had over his family when he converted, as well as the New Testament tacking on the brief addition “and all his household” as a kind of brief summary of what was likely a much more lengthy and complicated process.