Satan and the Problem of Animal Suffering (3)

As I type this post I have Planet Earth on in the background, which by the way is awesome and you should not sleep till you have watched every episode twice (okay thats an exaggeration – but they’re good). Having it on renews my interest in this topic and reminds me of its importance. The reason animal suffering is important is that it arouses serious apologetics concerns about the adequacy of the Christian view of origins. Also, more basically, it affects how we view God and the world he created.

So, continuing in my thoughts on this issue, I will address here the most common response that I have heard to the problem of animal suffering, namely, the view that animal suffering is not a moral evil which requires explanation: it is simply the way God made the world. Before I get into that, however, I need to say a word about whether animals are capable of suffering.

There are some who argue that animals do not suffer, and that any association between the word “animal” and the word “suffering” is an anthropomorphic projection onto animals from human experience. Proponents of this view usually distinguish between sentience and consciousness, arguing that while more developed animals feel the sensation of pain, they lack the mental consciousness with which to organize and interpret this sensation. Therefore, while (some) animals may feel pain, they do not, strictly speaking, suffer. Some would even suggest that if we are going to talk about animal suffering, we might as well go the whole route and talk about plant suffering.

While it is helpful to be cautioned against the danger of anthropomorphism, and while this view may mitigate the problem of animal suffering in the case of lower, simpler animals, at the end of the day it is very difficult (for me, anyway) to accept the thesis that larger, more complex animals do not suffer. The similarities between the way human and animal brains receive information from the nervous system, the sophisticated behavior of highly intelligent animals such as dolphins and chimps, the ways animals respond to pain (for example, an abused dog growing distrustful of humans), and finally, sheer intuition all seem to militate against this view. Also, if the ability to suffer depends upon a centralizing consciousness and awareness of pain, then its difficult to avoid being forced into the problematic conclusion that infants and some severely retarded humans cannot suffer. However we respond to this huge issue, and whatever tensions we may be forced to embrace, I don’t think response is our best bet.

It is more common to admit that complex animals do suffer, but to argue that it is not a fact of moral significance. Appeal is often made in conjunction with this argument to God’s creation of, and provision for, predatory

Sometimes to this view is added the claim that animal suffering is harmonized by the greater beauty of nature. Just as in every beautiful painting there are both bright colors and dark shades, and just as in every beautiful symphony there are both moments of tension and discord as well as moments of harmony and release, so it is in God’s creation, God’s painting, God’s symphony. The reason that animal suffering causes us problems is that we are a part of the natural world, and thus we are unable to see the whole picture, seeing instead only fragments and pieces. Augustine’s comments to this end in The City of God are worthy of extensive quotation:

But it is ridiculous to condemn the faults of beasts and of trees, and other such mortal and mutable things as are void of intelligence, sensation, or life, even though these faults should destroy their corruptible nature; for these creatures received, at their Creator’s will, an existence fitting them, by passing away and giving place to others, to secure that lowest form of beauty, the beauty of seasons, which in its own place is a requisite part of the world…. This is the appointed order of things transitory. Of this order the beauty does not strike us, because by our mortal frailty we are so involved in a part of it, that we cannot perceive the whole, in which these fragments that offend us are harmonized with the most accurate fitness and beauty. And therefore, where we are not so well able to perceive the wisdom of the Creator, we are very properly enjoined to believe it, lest in the vanity of human rashness we presume to find any fault with the work of so great an Artificer…

For me personally, I find this approach possible, but unsatisfying. As I look at the animal world, I cannot shake the the feeling that something is wrong here. There is much beauty in nature, but the amount of waste, futility, inefficiency, brutality, and pain seems unnecessary and incommensurate. (It does not help that we are dealing with hundreds of millions of years of it, either.) However, I do not have enough information to evaluate this view with certainty, so I will keep thinking it over. Here are my questions and concerns that will inform my thought process as I continue to mull it over:

1) Does God’s provision for carnivorous animals in Job 41 and Psalm 104 entail that animal predation is his creational ideal, or is it possible that God provides for carnivores despite their existence having been severely affected by sin (as he provides for all humans [Matthew 5:45] despite the devastating effects of sin on human life)?

2) What is the biblical portrait of God’s posture towards animals, and how does this affect the way we approach this issue? Does God’s compassion for the cattle of Ninevah (Jonah 4:11), his goodness and mercy toward all his creatures (Psalm 145:9), and his generous provision for all animals (Genesis 6-9, Psalm 104, Psalm 147:9, Matthew 6:26) square with the idea that he has designed animals to live according to the principle of the strong devouring the weak from the beginning?

3) Finally, what is the meaning of Romans 8:20, “the creation was subjected to futility,” and what is its relevance to this debate? Does this statement refer to the human fall and its effects upon nature, as traditionally interpreted? If so, and yet animal death and suffering predate the human fall, is it possible that although animal death already existed, its conditions and brutality were aggravated by the human fall?

In my next post we will talk about Satan and how the crafty old serpent might be relevant to this whole issue (hence the title of this series of posts). 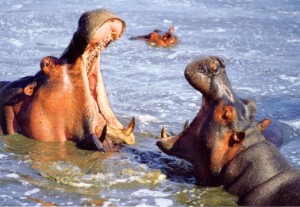