Some Thoughts on Christian Smith’s The Bible Made Impossible 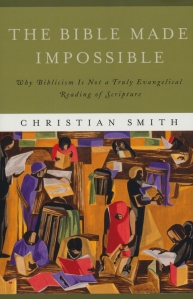 I’ve been looking a bit at Christian Smith’s The Bible Made Impossible: Why Biblicism is not a Truly Evangelical Reading of Scripture (BrazosPress, 2011). I agree with many aspects of Smith’s critique. While I consider myself to have a high view of Scripture, I have broadened a bit in my understanding of all that this entails. I’m generally very conservative on issues of authorship, canon, date, etc. But I share some of Smith’s concerns about the way the Bible is treated by fundamentalists and some evangelicals. I’ve often felt curious about the way the doctrine of biblical inerrancy, for example, can be used a litmus test of orthodoxy and a social boundary marker, while all the while it is defined in such different ways in different contexts. (Smith has an interesting footnote on pp. 194-5 where he argues that there are two different versions of inerrancy – an “unqualified, flat-footed” inerrancy which is advocated at the popular level, and a more sophisticated inerrancy which retains the term but nuances and qualifies it in so many ways in response to academic questions that it operates quite differently from the more popular versions of inerrancy. Frankly, I get what he is talking about.)

But for the most part I didn’t find Smith’s case very compelling. First of all, his portrayal of biblicism often felt like a caricature, like it lacked the genuinely sympathetic understanding that makes for an excellent critique – the “I get it from the inside-out” awareness that compels you to interact with the best, not the worst, components of a certain position. For example, his very definition of biblicism seems pretty obviously problematic: “by biblicism I mean a theory about the Bible that emphasizes together its exclusive authority, infallibility, perspicuity, self-sufficiency, internal consistency, self-evident meaning, and universal applicability.” I don’t really know anyone who self-consciously believes in Scripture’s “universal applicability” or “self-evident meaning.” “Exclusive authority” is also a stretch – at least in my experience.  I can’t help but feel that Smith has excluded most thoughtful evangelicals with this definition.

It seems significant to me that Smith, as he mentions in the preface, wrote this book around the time of his conversion to the Roman Catholicism (xiii). Much of the book feels directed against his evangelical upbringing, and I think I understand some of the attitudes towards the Bible at the popular level he is reacting against. A big part of what seems to annoy him, for example, is when people treat the Bible as a universal “handbook” for all kinds of issues, from dating to economics to how to train your pet, etc. Okay, I get that. But I think his book would have had greater value if he had engaged with evangelical treatment of Scripture against the backdrop of the classic Protestant doctrines of Scripture upon which it is founded, such as sola Scriptura (which was not opposed to tradition and creed) or the perspicuity of Scripture (which applied to matters of salvation, not all theological or a-theological topics). Much of what he is arguing against here seems to have less to do with different views of the Bible and more to do with different degrees of intellectual sophistication in practical use of the Bible. Christians of all traditions – including those, like Smith, in the Roman Catholic church – are guilty of treating the Bible in a simplistic way.

The core of Smith’s critique rests upon his thesis about “pervasive interpretative pluralism” – he frequently notes that even those with a high view of Scripture tend to disagree about all kinds of matters, and for him, this decisively argues against biblicism. My question is: why is “pervasive interpretative pluralism” anything more than a hermeneutical issue? Isn’t it simply a result of our finitude and fallibility as human thinkers, regardless of our doctrine of Scripture? Isn’t it just as much of a problem in the Roman Catholic church, for example – or really any sizable, diverse tradition, within or without Christendom? The myriad of different views on any given topic could be cataloged in Roman Catholicism quite easily – whether stretched back historically, focused on rulings and counter-rulings of different Popes and church councils, or seen today in the diverse opinions held on a multitude of issues within the Catholic Church. If one appeals to authoritative rulings from the Church to decide the issue, one must then adjudicate between the numerous interpretations of those rulings – and so on ad infinitum. Any authority source – whether the Bible or the Pope or human reason or the U.S. Constitution – can lead to “pervasive interpretative pluralism.” In no case does that fact as such discredit the authority.

Smith offers a Christo-centric and narrative approach to the interpretation of Scripture as an alternative to biblicism. But it seems to me that many of the individuals and institutions that Smith perceives s “biblicist” also operate with a narrative and Christo-centric approach to Scripture. This was one of the main emphases of my seminary education, which took place at an institution (Covenant Seminary in St. Louis) which Smith critiques as “Biblicist” (13). Or I wonder why Smith doesn’t engage more with the great Dutch Reformed theologians like Herman Ridderbos and Geerhardus Vos who championed a redemptive-historical approach to Scripture, rooted in Christocentric hermeneutics? That would have been a more fruitful dialogue, in my opinion, and would have pushed the issues at stake in our doctrine of Scripture in more helpful avenues of thought.

In short, I didn’t think Smith engaged very sympathetically with a classic evangelical and Protestant doctrine of Scripture. Perhaps he has a legitimate complaint about the simplistic and moralistic way some evangelicals and fundamentalists use the Bible in their practice. But the complaint, in my opinion, is made too clumsily and applied unfairly. It could have been made almost as well, it seems to me, by a Protestant observing certain Roman Catholics, as a Roman Catholic observing certain Protestants.